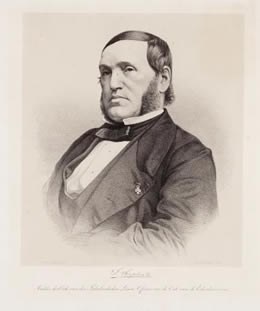 Samuel Sarphati: the man who gave us our name

The son of Portuguese-Jewish parents, Samuel Sarphati was born in 1813 in the heart of the Jewish neighbourhood, between the Keizersgracht and Weesperstraat. After studying medicine in Leiden and publishing his PhD on tuberculosis, Sarphati returned to Amsterdam at age 27. Here, he started as doctor at the hospital for the poor in Rapenburgstraat. His patients, mainly from the Jewish neighbourhood, lived in conditions that were possibly even more appalling than in other working-class districts. Amsterdam was a city in decline in the first half of the 19th century. The stench and pollution of the many neighbourhoods just outside the canals resulted in poor public health. Sarphati realised that he could not offer a structural solution for the medical needs of his compatriots in his role as doctor to the poor. The regular epidemics were inextricably linked to the poor living conditions and poor public health. In order to help his fellow Amsterdam residents, he needed to improve the city’s hygiene. Sarphati decided not to limit himself to fighting symptoms and went to the city council to convince them about the destructive consequences of not removing waste from the streets. Sarphati stressed that he wanted to improve the daily human waste collection service, better known as the ‘boldootkar’ (Boldoot cologne cart).

The city council was convinced and in 1847 Sarphati gathered enough starting capital to become Director of his own waste and fertiliser company, located on Roeterseiland, while also continuing to work as doctor to the poor. Amsterdam became cleaner and considerably more filth disappeared from the streets and canals. In 1851, Sarphati visited the World Exhibition in Chrystal Palace in London. Sarphati was shocked to find how embarrassingly far behind the Netherlands was with respect to technology, compared with other European countries. When he returned to the Netherlands he decided to establish an innovation platform, known as the Vereeniging voor Volksvlijt, to share publications, exhibitions and other correspondence from Dutch industry with other countries. The associated exhibition building on the Amstel, known as Paleis voor de Volksvlijt and inspiration for the English Chrystal Palace, was only finally completed on Frederiksplein in 1864. This building, in which knowledge exchange was key, was considered to be the crowning glory of his work. Unfortunately, it was totally destroyed in a fire overnight between 17 and 18 April 1929.

As well as his work as doctor, the establishment of the Vereeniging and the waste and fertiliser company, in 1855 Sarphati also decided to address the limited food supply for the poor. Nutritious bread for everyone would improve public health. He started a bread factory on Vijzelgracht where some 9,000 nutritious and affordable loaves of bread were made every week. This enabled Sarphati to break through the prevailing ‘flour cartel’ of millers and bakers and this made a huge difference to his more disadvantaged compatriots.

Ten years after establishing his Amsterdam bread factory, Sarphati died suddenly aged 53 following a brief illness that lasted a few days. The cause of his death is unclear, although the death of his wife two years previously had had a significant effect on him. His sudden death caused a shock-wave across Amsterdam and his burial developed into a large-scale tribute. Thorbecke wrote in a letter of condolence to Sarphati’s elderly father: ‘Amsterdam and the country have lost one of their most useful citizens.

Twenty years after his death a memorial to Sarphati, a bust, was unveiled in the park named after him. A good friend and philanthropist, Abraham Carel Wertheim, spoke during this unveiling: ‘I urge you to gaze upon the memorial of Sarphati, so that indifference, fear, doubt and self-interest disappear, and you join the ranks of those who place their country and their city above themselves.’

Sarphati Amsterdam admires and honours the inexhaustible efforts of Samual Sarphati in improving public health and aims to continue this in his name.